It’s time for another character spotlight from my novel Dimes, Profiles and Wives. The second book in the series, Love Without a Limit, is due to come out by the end of 2018. So, who is this character Sharon Denise Douglas? Sharon is the character that readers will love and hate.  She is the woman who grew up in the streets but turned her life around. Currently she is one of the most valuable assets to her law firm due to her tenacity. She’s only in her early thirties and is being groomed as a junior partner.  Her claim to fame is this though: I don’t need a man; a man needs me to be all he can be. As the ideal trophy wife, she’ll add so much collateral to her husband just by her name alone. So, she thinks and lives her life wearing a thick mask she’ll never really take off.


The problem with Sharon is Sharon is not her real name. Niecey Walker wasn’t born with a silver spoon in her mouth and her father is not deceased. He’s locked up in the federal penitentiary for being a drug kingpin in her home city of Baltimore.  But you’ll never know that unless you get her to remove her mask and funnel underneath her many layers. Does she even know who she really is? Maybe, but it will cost her dearly as she finds out.


Sharon’s character is based on a lot of fake friends and associates I’ve encountered over my life time. Most of those women had one thing in common: they could fake it until they made it. Half of the time women who deem themselves to be the trophy have serious problem with being in control. The spirit of Jezebel engulfs their life and creates havoc for those who really love them. Taking control over all their situations, even to the point of living a life full of lies, becomes detrimental to women like Sharon.


She is a Delilah in hiding with the worst case of control issues likened to Jezebel. All in all, Sharon is double trouble. Still though the man she has in her cross hairs, Marcus Anthony Washington, is enamored by her beauty and assertiveness. Bull will he meet his demise from falling for her? Find out if she ever reveals her true self in Dimes, Profiles and Wives. 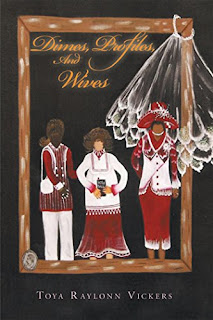